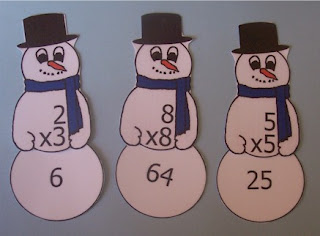 Mom's burned out. The kids would rather do something else. Christmas is just around the corner and there is so much you'd like to do, but what about homeschooling. What about that great curriculum you had planned.


Every year that I planned my curriculum, I strategically included a holiday plan. I figured out that if we totally let go and had no plan, it backfired. It always seemed like the children fought more and everybody was bored. But if I planned something appropriate to the season that helped them to still be focused on learning, everybody was happier.

There are so many options this time of year. As I try to decide which personal examples to use in this post, I scan the many wonderful memories, and it hard to choose. File folder games, like the one pictured above are always a good thing to pull out when you need a change. They are a great way to make rote learning fun. I shared my Turkey Math game from last month with a friend. She told me the other day that her son loves it. When his public schooled friends come over he wants them to play it with him. They are convinced he is trying to make them learn something, but he is convinced that it is just a fun game and everybody should play it. There are so many ways to use file folder games, and games in general, for learning. This is a great time of year to be pulling those out.

But there is so much more. I think our favorite thing to do at this time of year is to choose a theme. Our theme has generally been a country, although one of the other great ideas I've heard is to do a colonial Christmas. One year we chose Australia. I don't really know why, mostly because we keep joking about moving there. We learned that on Christmas day Aussie's usually gather for a barbie (not a doll, a barbecue). To this day when we have a barbecue my children still pull out their Australian lingo, trying their best to imitate the accent too. Australians have another tradition, one borrowed from England. They make Christmas Crackers, a small tube with goodies inside. To open it you pull each end and it pops. We were so fascinated with this that we searched the internet and found a place called "Olde English Crackers", where we could purchase the cracker snaps that make the pop when you pull it apart. We made crackers and found them so entertaining that we made more for the extended family get together. They became a family tradition for several years after that. Studying another country at Christmas time is great way to add fun to the season and study a culture and its traditions.

One year we studied Norway at Christmas time. This was probably the highlight of all the homeschool activities we have chosen for Christmas. In fact just last week one of my children said to me, "We should have a Norwegian family Christmas again. That was fun." The thing that was especially unique about this one is that my great grandma came from Norway. So after studying the many aspects of Norway, from their lemming population to their Christmas traditions, and making a Norway lapbook, we planned a Norwegian Christmas family home evening. We made it a big deal. First, we found a book of Norwegian recipes and planned dinner from this collection. We made julekake, and other desserts from Norway. We invited the cousins and grandparents. Grandma told us about her grandma who had come from Norway. She showed us things Grandma Serena had crocheted as well as items that had come from Norway. It was a connection for my children and the other cousins that made it more personal. We had some great entertainment and let the girls all dress up in white, wrapping red ties around their waists. We made a wreath of electric candles for one of them to wear and let the rest of the girls carry a single candle as they filed into the front room. Before they did this we taught everybody the song for Santa Lucia and tried to sing it as the girls entered. The evening was a hit, a great culmination of everything we had learned about Norway.

Whether you need to simplify and just pull some games out, or do something fun and different to keep your children excited about learning, remember to make it fun. Enjoy the season and this precious time you have with your children.